It has been almost 8 years since I sustained a very bad injury to my right knee. After several months of physical therapy, I regained my ability to run although never again as far or as fast as I had before my accident. Like it or not, I have had to appreciate the physical limitations placed upon me. Being aware of my limits enables me to plan around them, such as to run on sand instead of pavement, and still achieve my end goal.
The same strategy works when using TM1, or in this case, Planner, within IBM Cognos Express. Unlike the Enterprise version of Cognos where the administrator can create new TM1 server instances, only a single TM1 service is allowed in Express. An approval hierarchy can be used only once on a given TM1 server. Therefore, if a dimension is assigned to a Planner application as its approval hierarchy, that dimension cannot be used again as an approval hierarchy in any other application.
Here we see that the Corporate-PM application uses the Workflow subset of the Organization dimension as its approval hierarchy. We get a warning message when we try to again use Workflow as our approval hierarchy in a second Planner application. 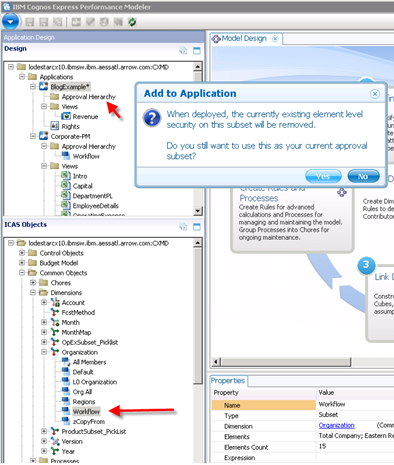 Creating another subset of the Organization dimension (here we call it WorkflowII) will not solve the problem. TM1 realizes that the subset was derived from the same dimension already designated as the approval hierarchy in another application. Again, we get a warning message when trying to reuse. 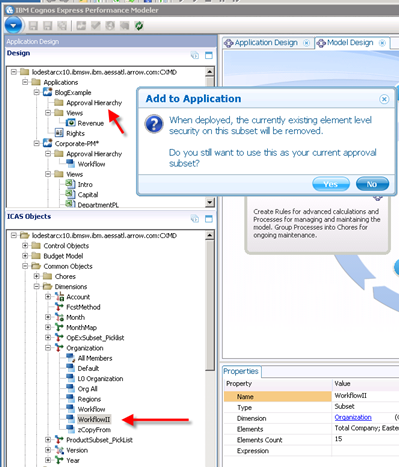 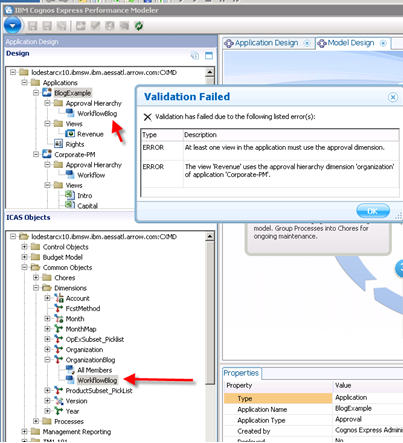 The Revenue cube would have to be rebuilt to use the OrganizationBlog dimension instead of the Organization dimension. Having to rebuild the Revenue cube for use in the BlogExample application could lead to further complications if data has already been loaded into the Revenue cube, TI processes have been written for the cube, or if links have been created between it and other cubes.
Even if it’s on a piece of paper or office whiteboard, taking the time to map out our TM1 applications and the cubes, hierarchies and dimensions required within them before starting to build can save headaches down the road. Also, make use of a well named folder system in the Model Design to keep objects organized. A little advance planning can turn a limitation from a roadblock into a guideline when working in Cognos Express.