​Copying a TM1 service from one environment to another

I recall growing up on the north shore of Eastern Long Island. Our cozy little house was surrounded by acres of farmland. Being completely cold weather phobic (I’m not sure of the scientific term for that if there is one), I haven’t been back there in over a decade. Sadly, my parents tell me that all of the open farmland has been plowed over and replaced with tightly packed housing developments. In my mind’s eye, however, I still see our happy home amid the fields of crops. Sometimes retaining an image can be a nice trip down memory lane, but in the case of copying a TM1 service from one environment to another, it can create an error.
We recently built a simple TM1 model and deployed the TM1 Web application for use as a demonstration model. We wanted to keep a backup copy of it on another server. We copied over all of the data and log files to the second machine, including the tm1.cfg file. We then added the new service instance to IBM Cognos Configuration for TM1.
The copied model opened and was fully functional within Performance Modeler. However, when we tried to deploy the application, we received the error message, “Approval Hierarchy is being used by another application”. TM1 was retaining its reference to the application deployed on the other machine. Since TM1 does not allow sharing of the dimension subset that serves as the application hierarchy, we needed to erase any references to the application on the first machine. Accomplishing that task is easy within Performance Modeler where all we have to do is run a prebuilt TurboIntegrator process. The system administrator can access the many control objects contained within TM1 to simplify its administration.

By default, the control objects are hidden. In order to view them, click the Actions menu icon on the TM1 Performance Modeler toolbar. Then select Show Control Objects from the submenu. The Control Objects folder will become visible.

Steps to Copying a TM1 service 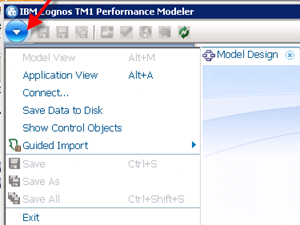 There are subfolders containing each of the different types of control objects. Since we are looking to execute a TI process, we expand the Processes subfolder. We want to run }tp_admin_delete_all, which is the TI process to remove all Contributor applications references from TM1 model. Right click on the }tp_admin_delete_all process and select Execute Process. Upon completion of the process, the application deployed with no error message. We succeeded in creating a fully functional copy of the TM1 model and TM1 Web application on a second machine. 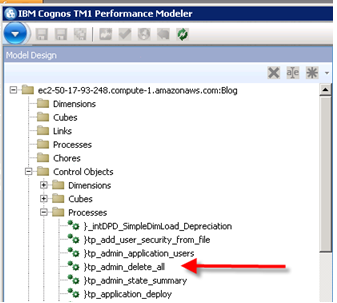 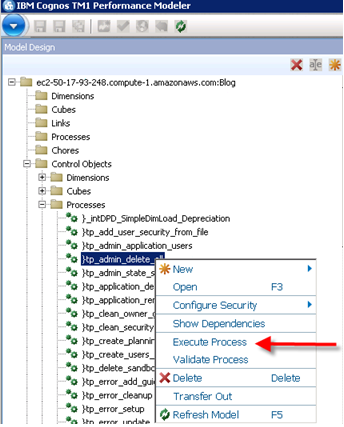 If you liked this blog on copying a Cognos TM1 service from one system to another check out this blog on Perspective Websheets & Active Forms For Cognos TM1 by clicking here.