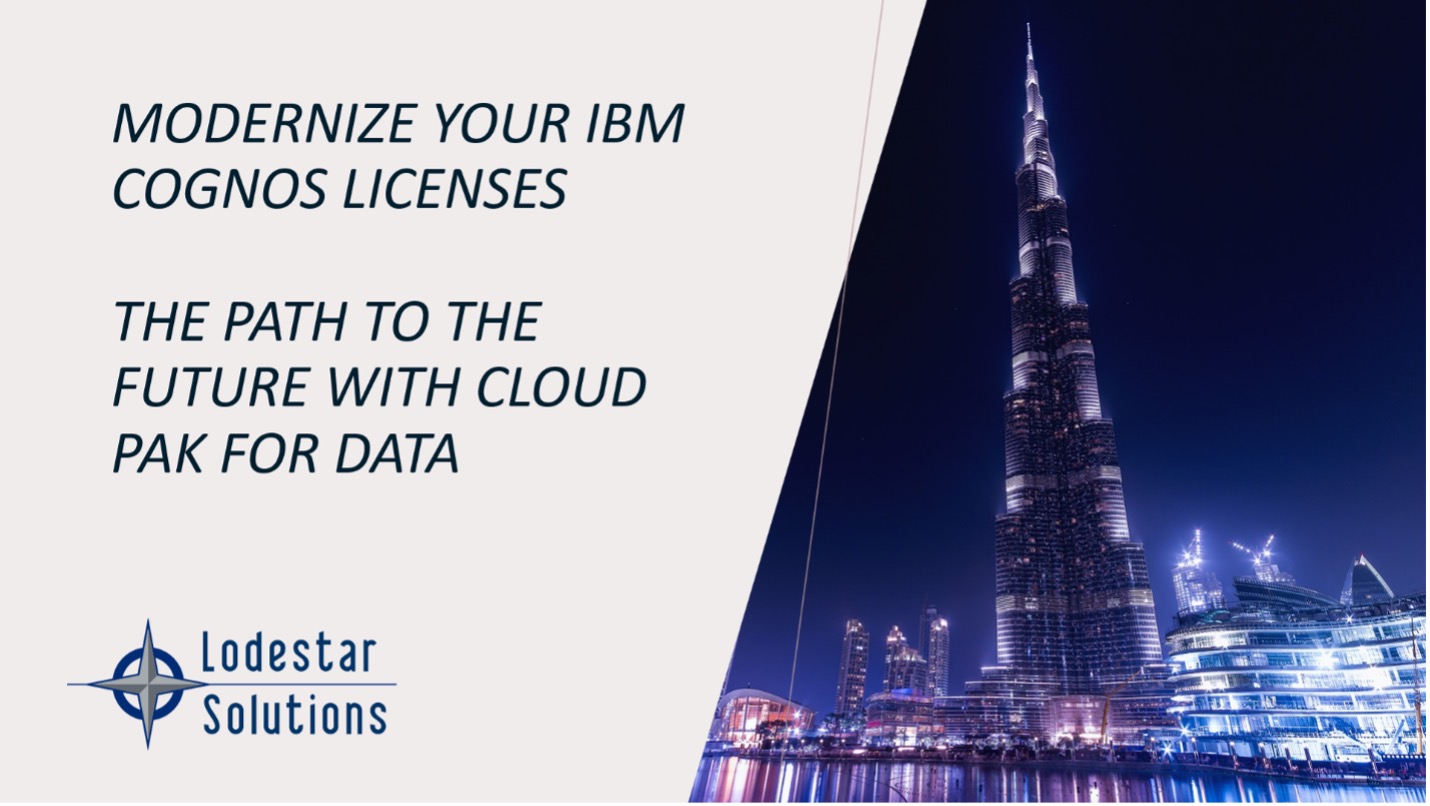 What does Modernizing Cognos licenses with IBM Cloud Pak for Data Mean?

IBM like all software companies is constantly creating new technology and with that comes new licensing and subscription options.  You may remember the last major overhaul of IBM Cognos licenses took place in 2014 where they simplified and supersized your Cognos BI licensing. See our blog on 2014 IBM Cognos BI License Changes or our video.

When you spend $34 billion for a company you know you need to do something with the technology.  It’s not surprising in 2020 IBM launched a new licensing initiative that bundles their existing technologies like Cognos in with Red Hat technology, and they are doing so with what they call IBM Cloud Pak for Data.

According to IBM, “IBM Cloud Pak® for Data is a fully integrated data and AI platform that helps modernize the way you collect, organize and analyze data to infuse AI.  The platform is cloud native and is designed to add powerful new capabilities for data management, DataOps, governance, business analytics and AI.  There is no need to integrate costly point solutions.  IBM Cloud Pak for Data delivers the modern information architecture to turn AI aspirations into tangible business outcomes while improving governance and protecting your data.”

I don’t know about you, but I’ve read that numerous times and still asked myself, “What the heck is IBM’s Cloud Pak for data?”

What the Heck is IBM’s Cloud Pak for Data

Let me attempt to decode IBMeze into something non-techies can understand.  IBM Cloud Pak for Data is a bundle of technology that can be deployed as a container.  As I explained in my earlier blog, What are IBM Cognos Cloud Pak for Data Containers?  containers are executable units of software which package up the application code along with its libraries and dependencies, so it can be run anywhere, like a desktop, server, or cloud.

For Cognos clients looking to move to IBM’s Cloud Pak for Data for Analytics by modernizing Cognos by leveraging the Cognos extension (called a cartridge), they will get 3 components: 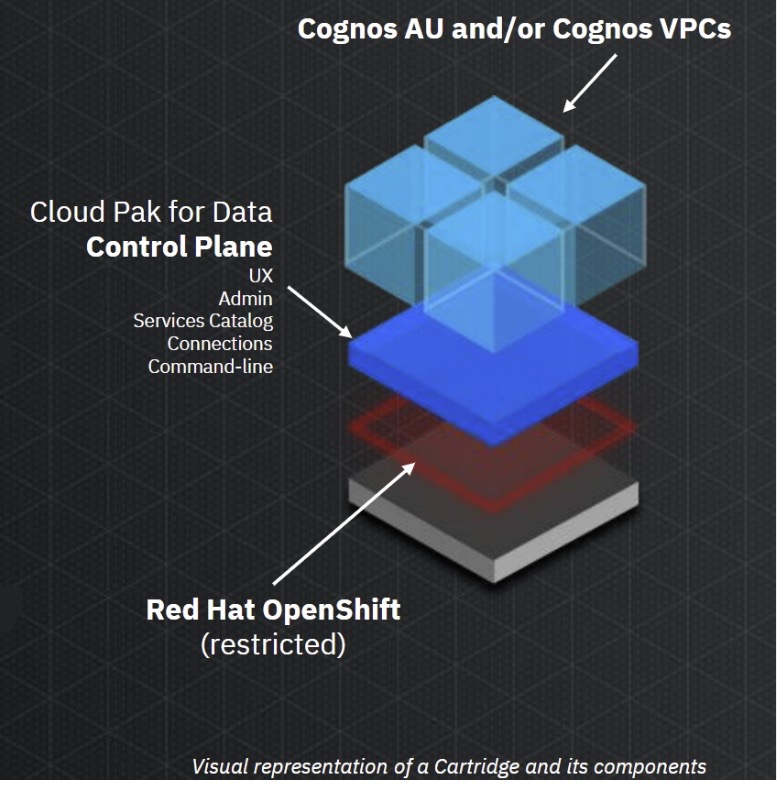 Why should I modernize Cognos and move to a Cloud Pak for Data for Analytics Licensing model?

There are several benefits to modernizing Cognos and moving to the Cloud Pak for Data for Analytics Licensing model.  The hybrid cloud does create an interesting flexible environment that many believe will help companies save money and time integrating all their data sources.  I appreciate many clients aren’t ready for this new technology but there’s a reason you might want to modernize your Cognos licensing so you can deploy the technology later.

IBM has done a cool thing in that clients that trade up or upgrade, “modernize” their licenses then the cartridge licenses have the dual deployment entitlement.  To move ALL licenses to dual deployment, a trade up or Upgrade (Modernization play) of all current entitlements to the cartridge parts is required. IBM is very determined to get clients to move to the new Cloud Pak for Data model which means OPPORTUNITY!

Clients that believe they will want to move to a containerized, hybrid cloud model, would be wise to seriously look at this opportunity now.  Currently IBM has created an environment where you might be able to move to the new Cloud Pak for Data Analytics at renewal time and do it for very little cost.

What If We Aren’t’ Ready for Hybrid Cloud?

If your organization is not ready for the new technology that’s okay!  By modernizing Cognos by investing in the Cloud Pak for Data Analytics cartridge for your Cognos and Cognos Planning Analytics you do NOT have to deploy the cartridge software.  The customer can install on/remain on Windows/Linux/Unix, in other words on premise and then when you are ready deploy the cartridge software.

It’s like the invest now strategy, like buying a lot in an area you know is growing and that someday you would like to build a house to live.  But buying it while the land is cheap.  Then when your family is ready you build on it.

If you own the Cloud Pak for Data Cognos cartridge, you have entitlements referred to as "dual deployment," meaning you can deploy 100% on Windows/Linux/Unix, OR 100% on CP4D/OpenShift, OR a combination of both.  The only limitation is that you cannot exceed their total license entitlement.

Time is of Essence for Trading Up - ACT NOW!

Now is the time for modernizing Cognos licenses!  Rumor has it that in North America the IBM Data and AI sales has committed for a short time to matching end user price on cartridge parts as compared to stand alone parts.  I don’t think this will last forever, so Lodestar Solutions recommends we have a chat to see if Cloud Pak for Data is a good fit for your Cognos or Cognos Planning Analytics environment.

Email us at sales@lodestarsolutions.com to set up a complimentary consultation on your licenses.  Or just call 813-415-2910.