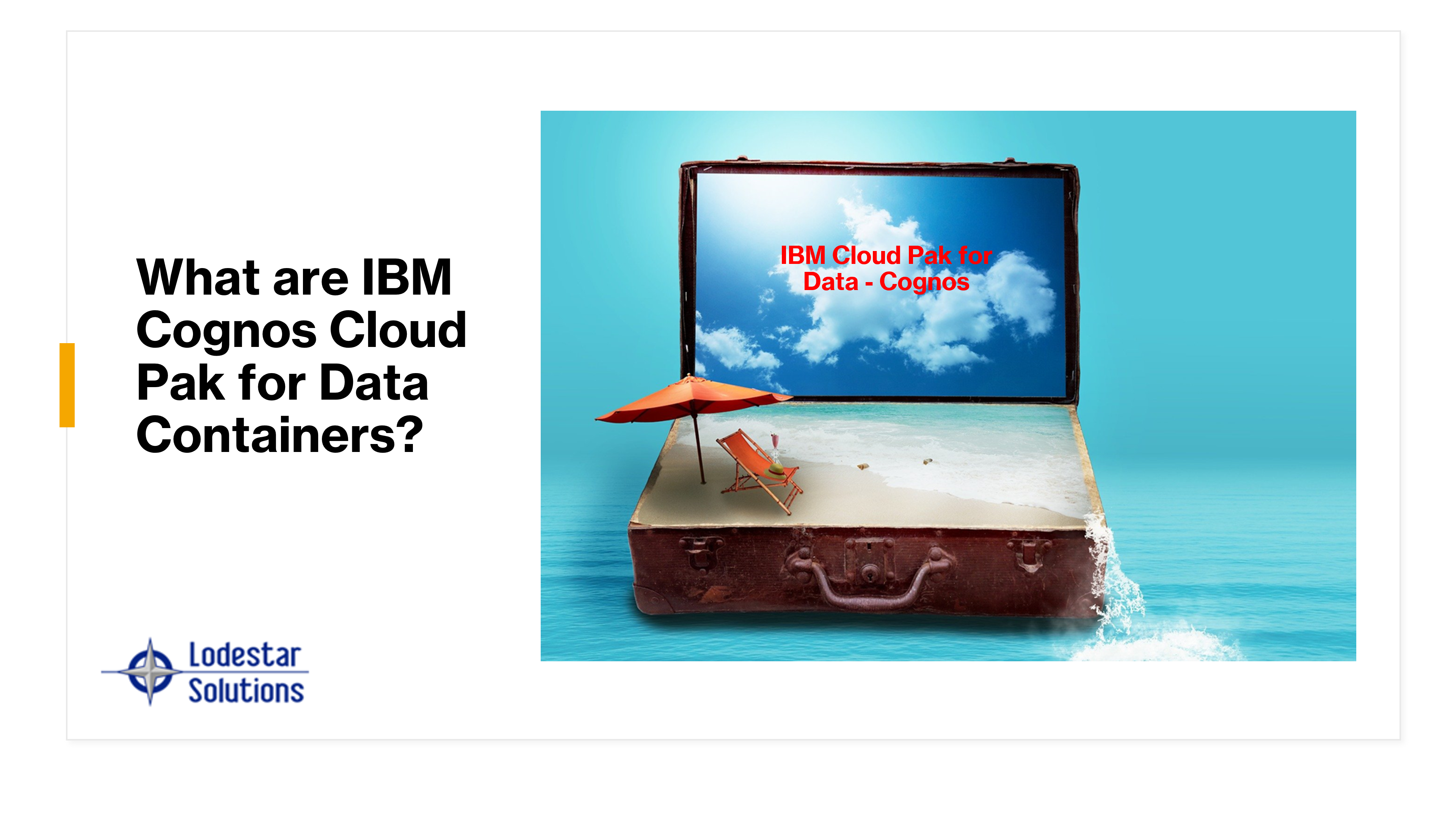 IBM is on a mission to change how you buy IBM Cognos software.  They are trying hard to “modernize” Cognos clients’ licensing with their new, IBM Cloud Pak for Data offering. For more information click here.

What is an IBM Data Container?

Imagine you are about to take an international trip and you need to bring everything with you as there are no stores where you are going.  You would plan your clothes for the anticipated weather and limit the number of bulky items, like shoes.  You would also pack a universal adapter kit and converter so all your electronics work.  You want to pack light but be able to go from 5-star hotel, to hotel, to a hostel in a village to a yurt in the desert.  You want the flexibility to be anywhere.

IBM Containers are like your suitcase and converter kit for your software.  They are executable units of software which package up the application code along with its libraries and dependencies, so it can be run anywhere, like a desktop, server or cloud.

The IBM Containers take advantage of a form of operating system (OS) virtualization in which features of the OS are leveraged to both isolate processes and control the amount of CPU, memory and disk that those processes have access to.

IBM Containers are Different then a VM

IBM Cloud Pak for Data Containers are different than a virtual machine.  Instead of virtualizing the hardware, containers virtualize the operating system (typically Linux).   IBM Containers don’t need to include a guest OS, they can leverage the features of the host OS.   Each individual IBM Container contains only the application and its libraries and dependencies.  Guess you can say, IBM Containers help you pack light and travel efficiently.  IBM Containers are small, fast and portable.

For more information on IBM Containers check out this link.

For Cognos clients looking to move to IBM’s Cloud Pak for Data for Analytics leveraging the Cognos extension (called a cartridge), they will get 3 components: It’s important to know that the Cognos Software included in the Cloud Pak for Data is available both containerized and in the more traditional format.  So, you can deploy Cognos the traditional way which IBM calls, bare metal environment on Windows, Linux… and/or containerized on-top of OpenShift and Foundational Services.  What is cool is if you are on the Cognos Analytics Authorized User Model of licensing you can deploy both at the same time.

Cloud Pak for Data Base Services Not Included in Cartridge

So now you know the answer to, “What are IBM Cognos Cloud Pak for Data Containers?”  They are like a suitcase for your Cognos software.  But I am sure your questions don’t end there.  I’ll be the first to admit this stuff can get confusing, but know you are not alone!  Lodestar Solutions is here to help!  Have a Cognos licensing question?  Want to understand IBM’s Cognos Modernization program?  Just email us at Sales@lodestarsolutions.com and we are happy to help.

Lodestar posts new blogs every week on relevant IBM Cognos topics. Be sure to website to check them out! We also have a YouTube Channel where we share valuable tools and how to's.