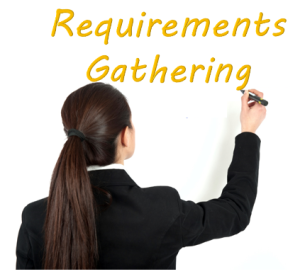 We at Lodestar have geared up for 2015 and one of our big topic has been BI Requirements Gathering.


During the week of January 11th, we had our All Team meeting, where we plotted out and solidified our exciting programs that will be continually rolled out in 2015. This led me to think of the correlation between what we did during the week and bi requirements gathering for software implementations.

We even had a scavenger hunt, where we were given clues to 6 locations that we had to take “selfies” at to prove we found each location.  We were separated into 3 teams.  Each team had a driver that was local to the Tampa area, but most of the passengers were from out of town.

The drivers were Melissa, Kelly and myself (Serena).

We got our clues at 5:30 PM and had to reach our destination by 7:15pm.  Simple enough, but of course we had rush hour traffic to navigate.

In a sense, you can equate this scavenger hunt to your software implementation: clues to what is required, guides that know the area, a start & finish timeframe, and the traffic would be all the slowdowns that pop up (ie configuring the environment, getting pulled back to your “day job”, etc.).

Note that of the 6 locations, only one was a good 20 minutes west of the other 5 without traffic.

And the order of reaching the finish line…

Kelly's team reached the final destination at 6:40 and was fortunate to not hit as much traffic or any major “roadblocks”, if you will.

Now, if that clown who ran out of gas on Kennedy Blvd had not been involved, we would have been closer to the winning time.  So sometimes you will just have to work through an obstacle keeping in mind the overall goal of the project.

Melissa’s Team arrived at 7:05 because of a combination of, not only traffic, but completely unforeseen issues that popped up beyond their control but completed each task and did so in the allotted time period.

Moral of the story, proper requirements gathering is key to reaching your goal and be aware that unforeseen circumstances may arise so you need to be flexible enough to evaluate each situation as it's presented to you.

For more tips and information please contact us at services@lodestarsolutions.com

5 Gathering Requirements Gathering Tips – What Are They Not Saying?

The task of requirements gathering for any new project can be daunting.   The challenge is to get the business to tell you what they need, often times when they don’t even know what’s possible.   Many companies send a business analyst out to get the requirements.  They might create a survey, interview people, and then they develop a document that lists their findings.  That’s what we would expect them to do, right.  How effective is this process in your organization?  The goal should be to:

DISCOVER WHAT THEY ARE NOT SAYING!

If you want to really get to know what the business needs, it’s time to discover what they are not saying.   Here are 5 requirements gathering tips for uncovering the truth:

If you are looking for proven methods in these areas, check out our Psychology of Requirements Gathering Workshop.